I have an interactive whiteboard in my classroom and so far I’m a bit ashamed to say, I haven’t really stretched it’s potential.

I regularly use it to display slides on Powerpoint, show the odd video clip and occasionally have pupils interact with the board by moving items around or matching pictures to words etc. Hardly groundbreaking, but for a subject which is very practical and pupil-led, using it this way has been fine so far.

In an effort to bring technology into my classroom in new and inventive ways I am going to experiment more with the board. I have a Year 8 group currently working on an Abstract Still Life project. The aim of the project overall is to create a painting so our starting point is observational drawing. Looking at artists Georges Braque, Ben Nicholson, Diego Riviera, Juan Gris, Pablo Picasso and Roy Lichtenstein, pupils have identified techniques within still life such as ‘positive and negative’, ‘overlapping’ and ‘an object from different viewpoints’.

In one lesson, pupils will draw a still life object from at least two different viewpoints, so for my demonstration I would usually have the pupils gather around me as I draw.

This routine has some problems:

To overcome some of these potential barriers I am going to try using the SMART notebook with 3D objects inserted. I have used 3D Warehouse to search for still life objects such as bottles and vases. I downloaded the files as ‘SketchUp 2014 Model’ files and inserted them into notebook. I have set up my page like this, with a sketchbook ‘page’ to draw on, on the right: 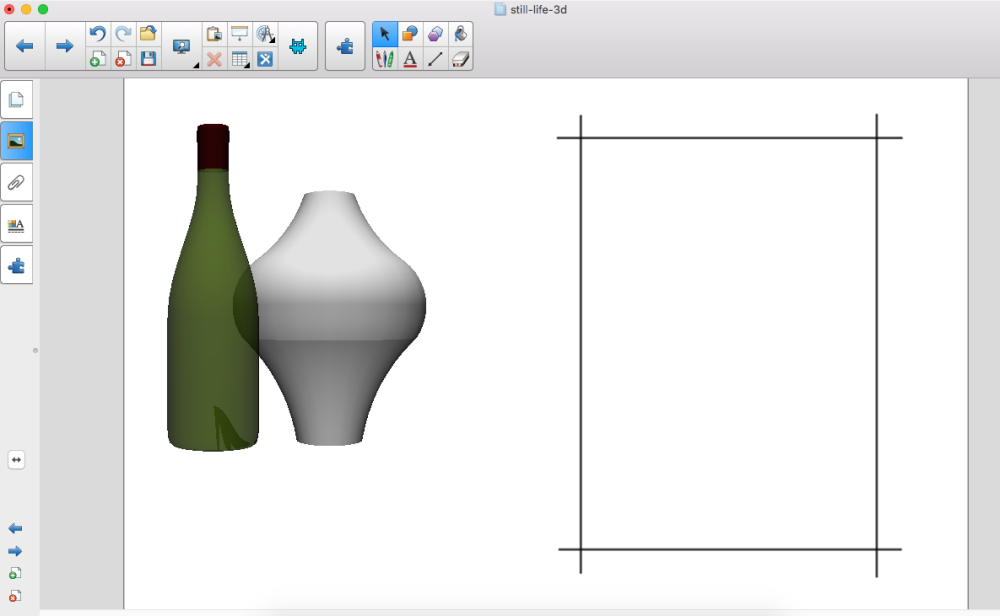 What is the benefit of using technology in this way to pupils?

It is widely stated that the use of technology in classrooms increases pupil engagement as it is more relevant to them. When engagement is increased, so is learning.

Pupils do not need to move from their seats to see what I am looking at, and we are all looking from the same direction and perspective, this means they are much clearer about what I am trying to achieve in my drawing. They less likely to be disruptive and time is saved. This may seem trivial but 5 minutes in a lesson which is only 60 minutes in length is really important.

I recently observed a lesson where the teacher carried out step-by-step instructions, displaying his work through a camera and streaming it onto the whiteboard. The pupils in the classroom were fully engaged and watching closely as he worked. This also meant that he could take very small steps, breaking down the learning and presenting information in a manageable way. This is essential in the classroom and would not be possible with a ‘bigger’ or longer demonstration at the start of the lesson which pupils would have to remember later on.

I have not taught the lesson yet, but at this link you can see how the objects can be moved around in 3D. I will draw an object from the side view, move it to a birds eye view to draw it again, then move it to a third view for my final drawing.

What do you think about using technology in this way in the classroom? Have you done something similar? Let me know in the comments.

I will update this post when I have done the lesson and reflect on how it went.